by Recent Advance
in Health tips
0

You pay for a gym membership and walk in, confident as can be. And when the front desk person asks you if you know how to work the machines, you proudly say “of course”. Seconds later, uh-oh, you realize you could’ve used some help, but you’re too shy to ask for it. Sound familiar? In that case, listen up – doing certain exercises wrong isn’t just useless, it can even injure you!

SUMMARY:
– The most common mistakes while doing squats are: rounding your back, going only half way down, rising onto your toes, and caving in your knees.
– The leg press seems like a rather simple machine that works out glutes and thighs, but if you’re using it wrong, it won’t do you any good. Avoid going too deep with your knees from the start, since this can injure your lower back.
– The most common mistake with shoulder raises is believing that the higher you go with the weights, the more effective the exercise will be.
– When you’re on the treadmill, avoid the temptation of holding onto the handrails – it makes running easier, and thus less effective, and can mess up your posture as you hunch over the machine.
– If you’re one of those people, but aren’t seeing any results in your abdominal muscles, you might just be doing crunches the wrong way. Don’t tuck your chin into your chest like many people do; this strains the neck.
– Triceps dips won’t give you the shoulder injury that many people fear, if you do them the right way. Keep your torso and butt close to the bench, step, or chair you’re working out on.
– When you row just with your arms, you’re exposing your upper body to too much pressure and can injure your back and shoulders. Try to split your efforts in a proportion of 60% going from your legs, and the remaining 40 percent from your core and arms. 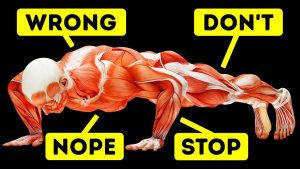 – Stretching the elbows too far out, moving with your hips instead of your whole body, bending your back and neck, and going only halfway down are the most common mistakes people make while doing pushups.
– Bicep curls won’t do you much good if you curl your wrists upwards while exercising, drop the weights down too quickly, or swing them up, engaging your shoulders and back instead.
– As you extend your arms behind your neck, you’re giving your triceps a great workout. You can do it either with an EZ bar attachment, or a rope, but in any case, make sure you lock your elbows tight to your ribs.
– Probably the biggest surprise on the list – pull-ups and chin-ups – are the exercises most people do wrong, just because they believe there’s no way to mess them up. In fact, if you’re swinging your body as you move up and down, don’t brace your core and legs, and flop around – you are, indeed, doing it wrong.