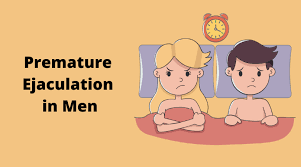 Psychological and physiological changes occur due to this reason with lots of problems on the people.  It further creates feelings of shame and embarrassment and has to face the struggle with this difficulty.

Ejaculation and its normal Time

Ejaculation time varies from one individual to another. This time period is called the ejaculatory latency. What may be a problem for one man may be acceptable to another. This level of distress that is experienced by the man or his partner is disgusting and full of tension.

Generally, too fast ejaculation or premature ejaculation during or before starting sex from the time of starting of sexual activity is the problem topic to be shared. Here we will explore some of the psychological factors and treatment options related to these distinct male dysfunctions.

Ejaculatory problems can have a devastating effect on self-esteem especially. Men with ejaculation problems mostly have feelings of inadequacy, feelings of failure, and a negative view of themselves. They feel lots of fear in a relationship and to tend to avoid emotional and physical intimacy. Due to this after some time the proceeding partner become frustrated and communication becomes strained.

When Ejaculatory dysfunction is often considered to be a nerve-related issue, penile sensitivity may be evaluated as premature ejaculation diagnostic tool. using various instruments that produce vibration. In addition, a medical history should be obtained regarding previous neurologic injury or trauma to the penis.

Other sexual dysfunctions like low desire and erectile dysfunction may also accompany the premature ejaculatory problem and they also need to be addressed.

Thus the resentments, anger, and feelings of rejection are often considered to accompany an ejaculation problem. In between the couples where premature ejaculation problem is an issue, the partner often have to internalize this dysfunction as their mistake then ultimately intensifying the man’s stress and performance anxiety.

There also may be additional psychological issues that underlie an ejaculatory dysfunction. For example, there may be issues of performance anxiety causing to infertility issue. There might be fears of rejection as well as no desire to please a partner.

Early psychological trauma can also be one of the significant factors. If there had been sexual abuse of the man has occurred, it can have sexual dysfunction and desire. While doing Sex, these people can trigger to bring back painful emotional feelings and memories from the past.

Premature ejaculation problems may also contribute to low libido and lack of interest in sexual activity. Without ejaculation, sex can become one of the sources of frustration and devoid of satisfaction. As a result, sexual activity can be perceived as more workloads than pleasure.

In some cases, the woman may not be interested in sexual pleasure. This might be due to her frustration and anger at the situation. Ultimately in such cases, couples agree to avoid sexual contact rather than face the emotional pain of another sexual failure.

As mentioned, the most effective approach for the solution for premature ejaculation problem is a combination of psychological assistance and medical intervention. Man can quickly achieve positive sexual experiences and gain a sense of confidence.

From an emotional standpoint, it is important to understand the history and background of the individual. Different Issues like depression, anxiety, past sexual experiences, psychological trauma, and relationship history are important parts to be considerations that need to be discussed early in the evaluation. Some more solutions are listed below :

In conclusion, with good motivation and psychological plans, ejaculation disorders can be overcome. Both the men and their partners should help to resolve the distress of premature ejaculatory problems.

BREAKING THE ICE ABOUT ERECTILE DYSFUNCTION WITH YOUR DOCTOR