by medicare nepal
in Surgery SLides
0

“Definitions, Types & Management”
🅐︎ 𝗔𝗿𝗰𝘂𝗮𝘁𝗲 𝗟𝗶𝗻𝗲:
The first is the arcuate line, which is a transverse line that marks the point where the posterior surface of the rectus abdominus muscle is only covered by transversalis
fascia and peritoneum and is the site of entry of the inferior epigastric vessels into the rectus muscle. Above arcuate line,rectus abdominus is surrounded by an anterior layer of rectus sheath and posterior layer.
🅑︎ 𝗦𝗲𝗺𝗶𝗹𝘂𝗻𝗮𝗿 𝗟𝗶𝗻𝗲:
Which can also be confusing because of varying definitions in the literature, such as a line marking the transition from transversus abdominis muscle
to its aponeurosis, from the costal margin to pubic tubercle versus the site of splitting of internal oblique aponeurosis at the lateral edge of rectus abdominis muscle.
🅒︎ 𝗦𝗲𝗺𝗶𝗰𝗶𝗿𝗰𝘂𝗹𝗮𝗿 𝗟𝗶𝗻𝗲: (arcuate line, fold, or line of Douglas) marks the caudal end of the posterior lamina of the aponeurotic rectus sheath, below umbilicus and above the pubis. Unfortunately, the semilunar and semicircular lines are not easily seen in the operating room.
🅓︎ 𝗦𝗽𝗶𝗴𝗲𝗹𝗶𝗮𝗻 𝗙𝗮𝘀𝗰𝗶𝗮 :
It is a small strip of aponeurosis of the transversus abdominis muscle bounded laterally by linea semilunaris and medially by the lateral margin of the rectus abdominis muscle.
🅔︎ 𝗦𝗽𝗶𝗴𝗲𝗹𝗶𝗮𝗻 𝗛𝗲𝗿𝗻𝗶𝗮:
Spigelian hernias usually
are located at the junction of the arcuate line and the semilunar line in the Spigelian fascia. However, the exact location of the arcuate line is variable, which gives rise to the concept of the “Spigelian hernia belt,” which is located between horizontal lines drawn just below the umbilicus cranially and at the anterior superior iliac spines caudally and is usually about 6 cm in length. Spigelian hernias can occur anywhere along the Semilunar line, but 90% occur in the Spigelian hernia belt.
𝙏𝙮𝙥𝙚𝙨 𝙤𝙛 𝙎𝙥𝙞𝙜𝙚𝙡𝙞𝙖𝙣 𝙃𝙚𝙧𝙣𝙞𝙖: 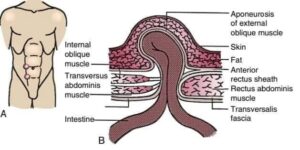 𝙏𝙧𝙚𝙖𝙩𝙢𝙚𝙣𝙩:
•Spigelian hernias should be repaired due to their higher risk of incarceration and vague physical diagnosis. Surgical repair can be performed via open or minimally invasive techniques. 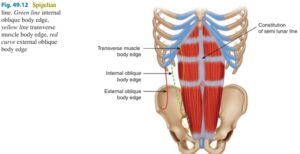 •There are little data on the benefits of prosthetic mesh in these hernias due to their rarity. However, for moderately sized defects (>2 cm) we recommend prosthetic reinforcement in open and minimally invasive cases.
•𝗢𝗽𝗲𝗻 repair involves a direct cutdown (typically transverse) overlying the hernia and the opening of the external oblique fascia to expose the posterior wall defect. The surgeon can then utilize a sublay technique or place the mesh anterior to the posterior fascia following primary closure. The external fascia is then closed primarily. 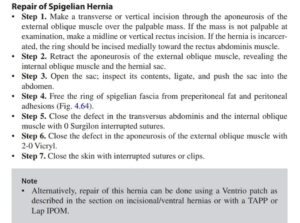 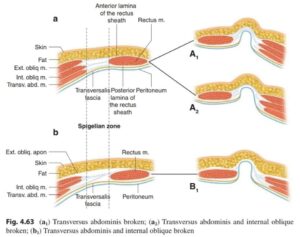 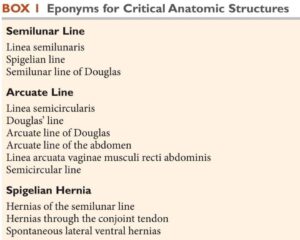 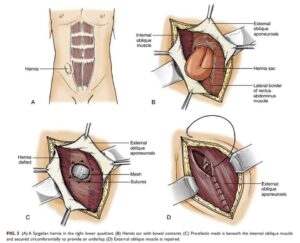 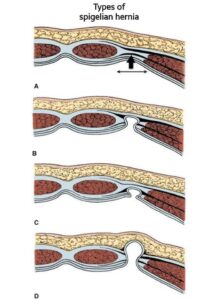 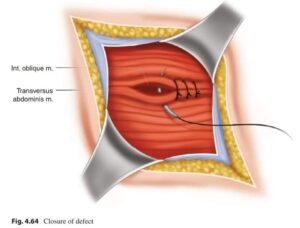 •𝗠𝗶𝗻𝗶𝗺𝗮𝗹𝗹𝘆 𝗶𝗻𝘃𝗮𝘀𝗶𝘃𝗲 repair is most commonly performed transabdominally but may also be attempted extraperitoneally by accessing the space of Retzius. If approaching the repair from the peritoneal cavity, an 𝗜𝗣𝗢𝗠 may be placed. Alternatively, a peritoneal flap can be created with development of the preperitoneal space & reduction of the hernia sac prior to the insertion of mesh. If placing mesh in the preperitoneal space, a coated, or composite, mesh is not necessary. 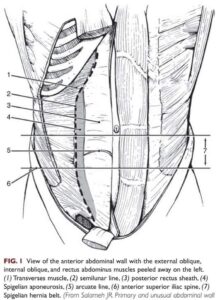 WHO and other Health Guidelines