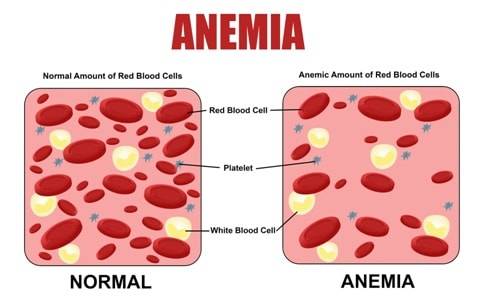 Prevention and Treatment of Anemia should know. Before that let’s know details about the anemia.

Red blood cells mainly consist of hemoglobin.  Hemoglobin is an iron-containing protein that carries oxygen throughout the body to organs and tissues and transports back carbon dioxide to the lungs from organs and tissues.  The iron contained in hemoglobin gives red color to the blood.

The person who suffers from anemia is called anemic.  Because of decrement in the number of RBCs or hemoglobin, anemic will have a low amount of oxygen level in blood making them feel cold, painful, tired or fatigued and look pale.  Normal range of hemoglobin may vary for different age and sex as well as may vary from one medical practice to another.

Because of the lowering of RBCs, organs and tissue will not get enough oxygen.  This will make me feel tired and weak.  In some conditions, anemic will also have a lower amount of iron in their blood, making them look pale.

These are the main symptoms of Anemia.  Symptoms are listed as below:

To produce RBCs, our body needs iron, vitamin B12, folate, and nutrients.  Lacking any one of these can cause anemia.  The most common cause of anemia is the low level of iron in our body.  Sometimes, the term anemia is used for when our body has low iron.  Though there are so many different causes of anemia, we can categorize them into three.

When the body has heavy blood loss, it absorbs water from tissues to make blood vessels full.  By this reason, blood gets diluted lessening the number of RBCs in blood.  The heavy blood loss may be due to:

Red blood cells (RBCs) are formed in the red bone marrow of bones and the stem cells in red bone marrow give rise to the blood.  These RBCs have 120 days of lifespan, so the body destroys them after their lifespan through the process called hemolysis.

In varied conditions, RBCs may have been destroyed earlier than their lifespan.  In such conditions, RBCs become less in the blood causing to have anemia.  The faster destruction of RBCs are due to:

Best Treatment for fibromyalgia : A Syndrome of Whole Body Pain

Anybody can suffer from anemia at any age and some may have higher risk to have anemia.  There are varied risk factors that increase the chance of developing anemia.

How to Be Safe From Corona in Bank

Treatment for anemia is determined by the type as well as the cause of the anemia.